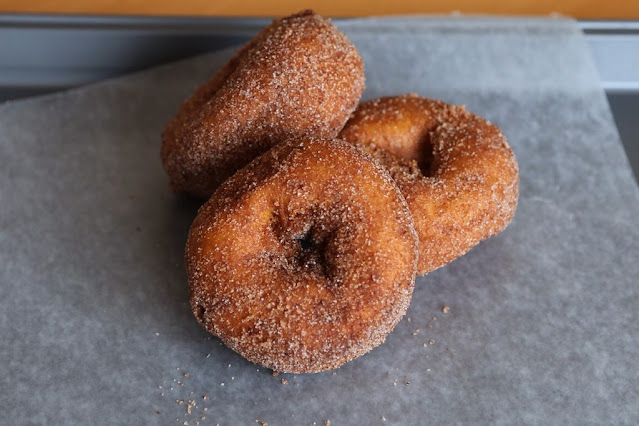 Camp fire donuts...do we need to say more? Enjoy this recipe sent in by Judy in South Australia, the perfect winter warmer for around the fire.
INGREDIENTS


Step 1: Heat the oil until it is just about to boil; the temperature is right when little bubbles are forming on the pot. You do not want a rolling boil. (At first I had the oil too hot and it turned the first donut black in under 10 seconds!)
Step 2: Cut each biscuit in half (down the middle) so that each pre-sliced biscuit makes two round dough circles. Then poke a hole in the middle of each dough circle.
Step 3: Deep-fry the donut biscuits until both sides are golden brown.
Step 4: Place the cinnamon and sugar in the brown lunch bag and shake to mix. When you remove the cooked donut from the oil, let any excess oil run off, then put it into the bag and shake until the donut is coated.
Step 5: Enjoy!
Source: https://thetouringcamper.com/campfire-donuts/

Do you have favorite recipe you like to cook on the road? Why not send it in to be featured on our RV Recipe website, if it gets popular enough, it might just make our quarterly cookbook Email Us
Photos are a serving suggestion only and may not be an exact representation of the recipe above.

Like this recipe? Have you made it before? Let us know what ya think!

Sign up for our newsletter, and we will send you delicious caravan and camping recipes straight into your inbox:

Thank you for visiting RV Recipes!!!
Consider bookmarking this site as we are consistently adding new recipes for you to cook while you're out on the road.
Whether you're cooking on your Caravan cook top or cooking in your Motorhome oven, or cooking on an open fire, I am sure we have a recipe for you!!!